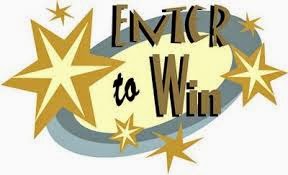 At the beginning of my writing career, I had the good fortune to connect with Jonelle Foutz  (www.writemindonline.com) who built and maintains my website. Almost ten years have passed and my writing has taken two different paths. After writing six books for the young adult market, I’ve returned to my first love, writing for adults. Therefore, my website needed a makeover, one that clearly delineates the different genres and directs people to their area of interest. Once again, Jonelle came through for me and I’m delighted with the results, so delighted that I’ve decided to run a contest to celebrate.

I’ll be giving away three prizes, a $10 Amazon gift card, a $10 iTunes gift card and a signed copy of one of my books.

When you qualify (or if you already have) there's one more simple step. Hit the comment button below and say something like, "Enter me. I follow your blog, liked your author page, etc. Be sure to leave me your email address so I can contact you if you’re a winner.


Scroll to the bottom to view the slide show.

Posted by Marilee Brothers at 1:58 PM No comments:

Castle Ladyslipper becomes The Curse of the Rose: Meet Emma and Garrick

For several years, I’ve toyed with the idea of dipping my toe into the self -publishing pool. At the time, I was busy finishing up a six-book contract for my young adult books. When I completed that obligation, I had time to ponder the future. Many of my author friends encouraged me to give self-publishing a try. Then, I re-gained the rights to my very first book, Castle Ladyslipper, from its original publisher and thought, “Why not?”

Though the content is the same, the book formerly known as Castle Ladyslipper has a new cover and a new name. With help, I managed to puzzle my way through the self-publishing maze. The result is The Curse of the Rose, now available for purchase on the Amazon, iBooks, Barnes and Noble and Kobo websites. 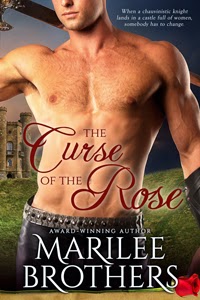 I’ve always loved books set in medieval times and have a fat three-ring binder crammed with research about 12th Century England, the setting for the book. During that time, King Henry II and his wife, Queen Eleanor of Aquitaine were literally at war with each other. Eleanor was determined to put their eldest son (also named Henry) on the throne. The king wasn’t ready to play second fiddle. Both raised armies and the fight was on.

My protagonists, Emma d”Arcy and Garrick of Hawkwood are thrown together when King Henry sends Garrick to make sure the queen does not get her hands on Emma’s vast estate. Garrick is the king’s man. Emma’s fate is aligned with Queen Eleanor. Their relationship mirrors that of Henry and Eleanor, but their love story has a much happier ending, thanks to the ghost of Emma’s great-great grandmother Rose, who happily haunts Garrick.

The book begins with the back-story, a prologue describing Rose’s error in judgment that ripples down through the generations that follow.

“But she can’t be gone!”
Lady Rose of Wentworth shook her head in denial. The deep red rose Gilbert had tucked in her braid that morning echoed the violent movement but held fast.
An abandoned cart without wheels was all that remained of the encampment, that and the cold, dead ashes of a cooking fire. The strangely garbed folk who practiced the old ways had vanished and with them, the woman with the knowing eyes.
With a sniff of disapproval, her maid, Sybil scolded, “I told you, mistress, but you would not listen.”
Rose reached into the neck of her kirtle and withdrew a silver chain hung with a sparkling crystal. The sleek, curved bodies of two sylkies held the crystal in place. Though she’d grown accustomed to its warm presence next to her heart, the talisman now lay heavy in her palm, a guilty reminder of her failure to keep a promise.
Sybil peered over her shoulder and whispered, “Mayhap the curse has begun.” Her fingers flew as she made the sign of the cross.
At Sybil’s words, Rose was stricken with a sense of foreboding so intense it stole the breath from her body. She gazed with horror at the sylkies—enchanted creatures, the pagan woman had told her—who shed their seal bodies and crept from the sea to mate with mortals. Had it not been for the sylkies bewitching her father, Rose would now be wed to the foul old man he’d chosen for her instead of her beloved Gilbert. But at what price? Had she traded her soul to achieve her heart’s desire?
Rose closed her fingers around the pendant, shivering as she remembered the woman’s warning:  Before a man leaves this earth, he desires one thing above all else—a son to carry his name forward throughout time—a son to bring fruition to hopes and dreams yet unfulfilled. Without a son, it’s as if he never lived. But heed me well, child. You must return the pendant within a fortnight. Each person in my clan wears this talisman. When the sylkies are apart from the others, they become disturbed. If you forget . . .
Rose pressed one hand to her belly. She and Gilbert had scarcely left the bedchamber since the day they were wed. It was possible, indeed likely, that a babe now grew within her.
A girl child, if the warning was true, followed by countless generations of women unable to bear sons because Rose could not rouse herself the soul-stealing pleasures of the marriage bed.
“Mistress, look! An omen.”
Sybil’s cry broke into Rose’s reverie. She followed the girl’s gaze upward. A single black cloud raced across the sky to the sun, it amorphous shape casting an eerie shadow upon the green hills below.
Rose opened her hand. As she looked at the crystal, its brilliant light blinked and went out. Like the eye of an approaching storm, a black shape formed and reformed in its center.
A sudden gust tore the rose from her hair. As it struck the ground, scarlet petals exploded into the air, swirling and dancing, leaving naught behind but a bare stem as a reminder of its former glory.
Rose dropped to her knees and sobbed, “Dear God in heaven, what have I done?”

Garrick of Hawkwood smashed a fist against his saddle and uttered a vile curse. The wrong damn castle! He could almost hear the king's hoot of laughter and the derisive words. "Try as I may, Hawkwood, each time I grant you a boon, you manage to muck it up. First, Maud of Grimsby expires on your wedding night and now . . ."
"This isn't Fairfield?: Garrick stared at the ancient porter who recoiled slightly at his tone.
"Course it is. Didn't I just say?"
"No," Garrick snapped. "You most clearly said, 'Castle Ladyslipper.'"
The old man gave Garrick a toothless grin and made a vague gesture toward the square whitewashed keep.
"Did I indeed?" His eyes danced with secret delight. "'Tis a flower, y'know. A great many of them grow within our walls."
Garrick groaned. Had Henry sent him to an asylum for lunatics? Was this some royal practical joke?
A kettle of eels, the king had called Fairfield. Marry d'Arcy's widow, Helene, he'd ordered with a crafty smile, then look for snakes amongst the eels.
A trio of small girls darted out from behind the wall. The tallest of the three stepped forward and tugged at the porter's tunic. "You're supposed to bid them enter."
With a flourish, the porter bowed, waving Garrick and his men through the open portcullis.
One of the girls shrieked as she ran, "Men! A full dozen of them. Come see! Come see!"
Summoned by the child's shrill cry, a flood of females poured into the bailey. Sharp-eyed matrons, tiny tots, wrinkled crones, demure maidens, woman folk of every sort, size, shape and age. With growing apprehension, Garrick scanned the crowd.
"Sir Garrick," his squire Toby called. "Where are the men-at-arms?"
Garrick shrugged. Where indeed? Other than archers visible in the parapets, Fairfield seemed woefully undermanned.
"This way, Sir Knight," a smiling woman said. The chattering crush parted to form a living aisle. At its head stood a tall, slender woman watching him approach, her face an unreadable mask.
Surely this could not be the Lady Helene, with manure-stained boots, bits of wool clinging to her kirtle and hair the color of summer honey bursting from a thick braid in a wild halo of curls. A huge wolfhound leaned against her leg, his sides vibrating with ominous growls.
As Garrick drew closer, the woman glared and curled her hands into fists. A sullen-faced boy clutching a wooden sword pushed his way through the crowd and stood next to her. Garrick pulled Rufus to a stop directly in front of the woman. She flinched slightly as his shadow fell across her face.
Unable to look away from the woman's glittering, green eyes, Garrick dismounted and handed his helm to Toby. Surely, now the woman would bid him welcome, give a slight bow of deference and greet him as a proper lady should. But instead, she lifted her chin and narrowed her eyes. An uncomfortable silence grew as the two locked gazes. Garrick bit back an angry response at the woman's rudeness and drew a deep breath to calm himself. Before he could speak, an overpowering scent of roses flooded his senses and enveloped him a a smothering, airless fog. His mind reeled in confusion as waves of dizziness crashed over him. Shaken, he raised his eyes to the silent woman. Bloody hell! Was she some kind of witch?

Posted by Marilee Brothers at 8:21 AM No comments: