I’m giving advice to writers today. Oh, I know you’ve heard it all so many times you just want to throw up, but this advice is special. It’s made special by the pathos in which it’s written. No, not bathos…pathos. It’s based on my own sad, sad experiences. So here’s my advice:

1.    BACK UP! BACK UP! Sure, I had my stuff backed up when the CryptoWall pirates attacked my computer. Unfortunately, computer genius that I am, the back-up was plugged into my hard drive 24/7, so when all the important documents on my computer were locked up with a special code…ditto the back-up. I clicked to open the book I was working on and received a curt little message telling me that for a ransom (they actually used that word) of $500 in bitcoins, which evidently can’t be traced, they’d provide me with the code to free my locked files. The pirates also warned not to waste time consulting a tech because he couldn’t help, and the ransom would increase the longer we waited to pay. They were right about the tech being unable to break the code. He warned that other techs had told him about owners who’d paid the ransom but didn’t receive the code. I didn’t pay the ransom.

Eventually I stopped fantasizing about armed drones attacking offices in Russia, where the pirates are supposedly located. I bought a new computer, changed internet provider and all my passwords, and decided I was through writing. Forever.

I realized it was karma. I’d just finished a book for the grandkids about a mouse family sailing down the creek in a toy boat to the big summer fair in Mouseville. Since only family would see the book, I felt safe in pirating (oh, that awful word!) illustrations from the internet. Everybody from Beatrix Potter to Little Golden Books contributed. My manuscript was encoded before it could be printed out in hard copy. Karma is a cruel mistress. Finally, I spat in karma’s face and started writing again.

2.    BE CAREFUL WHAT YOU WISH FOR. Make sure your love of writing is stronger than your distaste for what comes afterward, in case your dream comes true and a publisher actually gives you a contract.

I just wanted to write a story about an 1880s young couple who went to Montana to homestead after their disgraceful shotgun wedding. Folks in my writers’ group called it “your Little House on the Prairie for grownups.” Now I’ve got to get a website, learn how to blog and tweet and build an author’s platform, arrange a Thunderclap and try to get in on an email blast, whatever that is.

I’m in the process of filling out the six-page questionnaire for the publisher. One item really has me stumped. They want to know what actors would be suitable, if my book were to be made into a movie (Hah! When pigs pilot jets!). I’ve searched pages of internet photos of young actors and actresses for resemblance to two wholesome country kids of the 1880s. I want a sweet but hardy, pretty girl and a raw-boned, rangy blond boy, but all I’ve found are voluptuous Lolitas (if you remember that far back) and pretty boys.

But there’s a bright spot in this gloom and doom. I got my first royalty check from the agency yesterday, my share for the to-date sales of the book of Christmas stories by twelve of us newbies. It was $38.92. What’s pitiful is that I paid part of my own royalty. I bought twenty of those books for Christmas gifts.

But I’m just new enough to the game to be excited by $38.92. So it’s back to the computer, either to search for Hollywood’s fresh new faces; work on the new book; or try to duplicate the summer adventures of the mouse family, complete with pirated illustrations.

Let my pain be your gain. Write on!

Posted by Marilee Brothers at 8:00 AM No comments:

I live in Washington State, home to Microsoft, Nintendo and Amazon all of which are located on the other side of the mountains, as we dry landers tend to describe the route to the populous Puget Sound area. Their world is as foreign to me as a trip to the moon. In other words, I do not hang with the rich and famous. At least that’s what I thought. Turns out, I’m too clueless to know when I’m actually rubbing elbows with said famous people.

On Saturday, March 7th, I had the honor of attending a celebration of International Women’s Day at Heritage University. I joined a number of women artists and writers who were the featured guests. For those of you not from this area, Heritage is located in the lower Yakima Valley, nestled in the middle of hop fields, vineyards and apple orchards. Its mission has always been to offer education to the underserved. Over 70% of the student body is comprised of women, mostly Hispanic and Native American. Many of them are single mothers. The event on Saturday was a fundraiser for scholarships to the childcare center and the featured speaker was Jackie Bezos, mother of Amazon founder, Jeff Bezos. 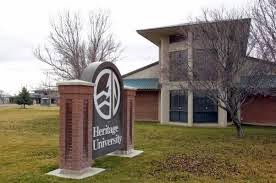 When I arrived Saturday morning and took up my position behind a table displaying my books, the room was buzzing with energy fueled by hundreds of wonderful, supportive women taking part in the event. After handing out cards and answering questions, I joined my sponsor at her table to listen to the speakers. Several introductions followed. A particularly lengthy one listed the many accomplishments of Mimi Gates, seated at the table next to me, along with a distinguished white-haired gentleman. As she got up to speak, the neurons in my brain finally began to fire and form a pattern like a connect-the-dots puzzle. I whispered to the woman next to me, “Are we talking about that Gates?”  She grinned and nodded.

When the speeches concluded, I hurried back to my book display and that’s when it happened. Bill Sr. stopped by my table, chatted to me about my books and picked up my business card! Squee!

Back at home, I related the incident to my husband. When I mentioned Gates was accompanied by a young man who stuck to him like glue, my husband said, “Private security. Bill Gates Sr. is the father of the richest person in the world. What do you think would happen if he was kidnapped?”

His comment put it in perspective for me. One pays a price for fame and fortune. Loss of privacy is at the top of the list. With that in mind, I'm grateful for my anonymity, my lack of fame. I'm free to bumble along, writing my books, enjoying friends and family, without the constant presence of a bodyguard. Yes, life is good.

No doubt my business card is now residing in the depths of an extremely pricey garbage receptacle, but that’s okay. Bill Gates Senior, you’re a nice guy and, in my humble opinion, niceness counts for a lot. You certainly made my day!